the synapse: where the magic happens

What is a synapse?
The synapse is the junction between two neurons, usually between an axon, which gives the signal, and a dendrite, which receives the signal. 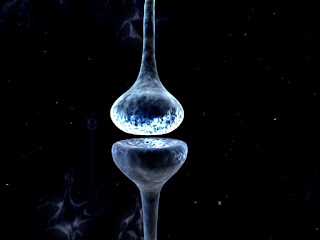 This meeting of neurons is absolutely essential to how the brain works.  It is where the information gets passed on from one neuron to the next.

The 'magic' at the synapse
When someone talks about neuronal pathways being strengthened, they usually mean a strengthening of this synaptic connection.  This strengthening (or weakening) is referred to as "synaptic plasticity." Specifically, when the connection between two neurons is strengthened, it is often referred to as Long Term Potentiation (LTP) and when it is weakened it is is often called Long Term Depression (LTD).  Synaptic plasticity is so exciting because it is a feasible biological mechanism for memory formation and storage.

How this 'magic' was discovered
The first paper to show that the connections between neurons could be strengthened was Bliss and Lomo 1973.  They were studying the hippocampus, the region that underlies episodic memory and spatial learning.

They found that when you stimulated the nerve fibers with certain frequencies (100 Hz is now a commonly used frequency for this), the signal from the group of neurons grew, and stayed large for hours.  (They tracked at least one experiment for 10 hours!)

The concept that activity patterns between cells could strengthen the connection between them fundamentally changed the way people thought about information processing in the brain. Now there is a huge branch of neuroscience devoted to connecting LTP and LTD to behavior and investigating the mechanisms which underlie synaptic plasticity.

In a retrospective paper, Lomo describes how the discovery came about.  I found this quote particularly interesting:


"Why did I not pursue and publish a fuller account of my findings in 1966? Because I was overcome by the complexity of the system and my lack of understanding of what was behind the findings. There was also no sense of urgency. Thus, when Tim and I published a full account in 1973 (Bliss & Lømo 1973), it still took years for the significance of the findings to be generally appreciated. "

It's hard to imagine 'no rush' to publish something like this and it is refreshing to see a scientist who is hesitant about publishing something that s/he does not fully understand.

Bliss TV, & Lomo T (1973). Long-lasting potentiation of synaptic transmission in the dentate area of the anaesthetized rabbit following stimulation of the perforant path. The Journal of physiology, 232 (2), 331-56 PMID: 4727084

Email ThisBlogThis!Share to TwitterShare to FacebookShare to Pinterest
Labels: a moment in NeuroHistory, basics, information processing, neuroscience for everyone