Neurons are like power cords because the work by communicating electrical signals from one place to another. 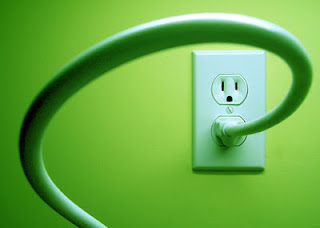 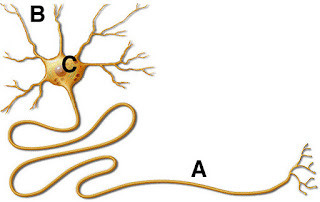 The dendrites receive the input from other cells.  This input causes an electrical change in the cell, either pushing the cell's voltage upwards (exciting the cell) or downwards (inhibiting the cell).  That signal has to travel down the dendrite to the soma (C).
The dendrites act like leaky power cords, and the strength of the signal decays during its journey to the soma.
In certain cells, the shape of the dendrite contributes to how it integrates multiple signals and how strongly it sends these signals to the soma.

The axon is responsible for sending out information from the neuron. It is usually longer that the dendrites because it often is carrying a signal from one brain region to another, from one hemisphere to the other, or even from the sensory neurons (like touch receptors) to the spinal cord.
When the axon is very long, it can't work if it is leaky. It will often have a myelin sheath that insulates* it and allows it to propagate its signal with great efficacy and speed.

Some ways that neurons are NOT like power cords are:
1. Power cords conduct electricity through the jumping of electrons, the current in neurons is due to the movement of ions (like sodium (Na+), potassium (K+), calcium (Ca2+), and chloride (Cl-)), and is not as fast as direct electron movement.
2. Power cords conduct huge amounts of electricity compared to neurons. The potentials relevant for neurons are on the millivolt scale, and the currents are measured in picoAmps. You could never be shocked by touching a neuron.

*it is more complicated than just acting as insulation, see Nodes of Ranvier if you really want to know how it works.

Email ThisBlogThis!Share to TwitterShare to FacebookShare to Pinterest
Labels: basics, information processing, neurons are like, neuroscience for everyone