The cells that make us eat: Part 2

In the last post, we discussed the finding that stimulating the AgRP neurons in the hypothalamus directly causes mice to eat.  You can see the video of the mouse eating with the light stimulation here. 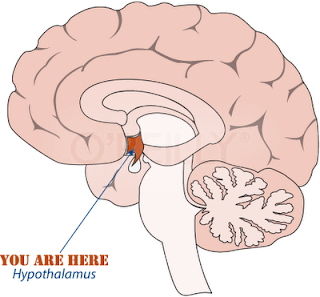 Today we will look at a follow up paper by the same group.  This paper looks at the mechanisms that might naturally stimulate these neurons.  As the authors mention in the discussion, the origin of the pathways that naturally cause these neurons to fire is not known. (as in, the part of the brain that sends the main signals to these neurons is still a mystery)  However, they can investigate what is happening at the junction between these pathways and the AgRP neurons, that is, at the synapse.

Using brains from mice that are either hungry or full, the researchers found that in hungry mice, the AgRP neurons recieve more synaptic input.

There are a few ways this could happen.  One possibility is that the upstream neurons are firing more frequently because they are receiving more input from other pathways. But since it is not known where these neurons are, that is difficult to test.  Another possibility is that the output ends of these neurons, the part which arrives at the synapse, releases neurotransmitter more easily in hungry mice than in full mice.

The research in this paper supports option number 2, that the hunger signal modulation occurs right at the synapse.

The researchers find that through a complex molecular pathway, involving ghrelin, leptin, and opioid signalling, the neurotransmitter release at the synapse is regulated by the animal's hunger state. Although too detailed to fully summarize here, the paper presents a satisfying and thorough explanation for how the AgRP neurons (the ones that cause eating when stimulated) could be modulated by hunger signals from the body.