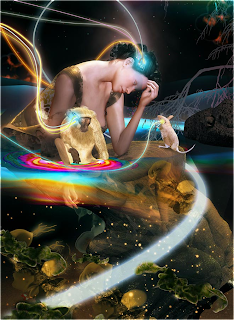 Optogenetics is a relatively new technique that inserts a light-sensitive channel or pump into a cell that would normally not be light sensitive. This channel can be inserted into the neurons of a mouse, worm, fly, rat, or whatever (has not been tried on humans yet to my knowledge).
Then, when a light is flashed onto that neuron, it activates, much like it would if it had just been stimulated by electricity or the normal neuronal pathways leading to it.

What is so great about this is that with tricks of genetics, a researcher can get this channel to express only in one kind of cell, making it so that cell1 is activated when the light comes on, but cell2 is not.

Previously if you wanted to stimulate neurons in a living brain you had to insert metal electrodes which would stimulate all the cells within a certain radius.  Optogenetics gives cellular specificity, where metal electrodes don't.

Some great discoveries are already being made using this technique:

Though this is not a technique that is meant to be used on humans for disease treatment, metal stimulating electrodes are already being used to treat some disorders (parkinson's see here and here. and depression).  How would the ethics of optogenetic treatments differ? Instead of a metal electrode, a genetic alteration would have to take place in some neurons and a fiber optic cable would have to be implanted.
Thoughts?
at 9:25 PM