Mirror Neurons in the Sociopath

What is a sociopath? A killer? A raging lunatic?
Martha Stout has written a relatively short book (though not as short as it could have been) defining the sociopath and arguing that sociopaths are surprisingly common, 4% of the population in fact.

1. Dr. Stout effectively argues against the stereotype that sociopath=serial killer.  She defines a sociopath as someone without a 'conscience' who is incapable of real empathy. If this is combined with 'bloodlust' the person very well may turn out to be a serial killer. But if it is combined with 'preferring inertia', the person will manipulate their way into a situation where they are taken care of and don't have to do anything.

2. A very powerful insight that Dr. Stout has is that the very fact of having a 'conscience' is what keeps 'normal' people from identifying and stopping sociopaths. A person with a 'conscience' will easily take the point of view of the sociopath and try to justify or explain their actions in terms of 'having a conscience'. "they are just depressed", "they didn't know this or that", "there must have been a miscommunication".  It is almost impossible for a person with a conscience to comprehend someone doing something manipulative or cruel for essentially no reason, so they try to invent a reason that would make the sociopath's actions comprehensible to them. The very thing that the sociopath is lacking: the ability to empathize and identify with the wants and needs of others, is the thing that prevents 'normal' people from identifying them.

1. What the heck is a 'conscience' anyway? Dr. Stout talks about the conscience like it is some brain structure that you either have or don't have. I wasn't convinced that people are either complete sociopaths or completely normal. I assume there is a continuum, and Dr. Stout does nothing to convince be otherwise, while at the same time constantly implying that it is an either/or situation.


2. I would have been much more interested if this book had delved into the possible neural underpinnings of conscience. It is getting a reward signal from the 'happiness' of others? Getting a pain signal from the pain of others? 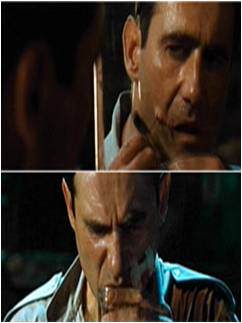 An example that came to mind is a scene from the movie Pan's Labyrinth that will probably haunt me forever. A man has had his mouth slit and there is a very painful-to-watch scene where he sews up his own cheek, bandages it, and then takes a shot of vodka. The vodka seeps out his cheek into the bandage. I remember having a very physical reaction to this part of the movie, literally cringing and grabbing my own cheek.

What I want to know is do sociopaths have this same physical reaction, or would the 'not having a conscience' or 'inability to empathize' prevent something so instinctual.

Well lucky for us, someone else is wondering this same thing something similar.  A 2008 paper tested healthy individuals for degrees of 'psychopathy' with a self-report questionnaire, and then measured their responses to transcranial magnetic stimulation (TMS) of the motor cortex during videos. They claim that this is somehow measuring mirror neuron activity, but I think that it going too far since they are not measuring individual neurons.

In 'normal' people, seeing a needle poking a hand causes a reduction in response to TMS stimulation. What this reduction in cortical excitability means is not clear, so any finding in this study will be hard to interpret. They found that the degree of response reduction was not correlated with the psychopathy index when taken as a whole, but when they isolate the 'coldheartedness' component, they find that the more cold-hearted a person reports they are, the stronger the signal reduction is during TMS. Despite the nice controls, this study leaves a lot to be desired.  They have a small sample size (n=18), and even their relatively mined correlation is not very strong (R=-0.58). In addition, the increase in signal reduction is 'supposed' to indicate 'more empathy', so the meaning of this study is basically ripe for the cherry-picking. Fortunately they don't spend a ton of time speculating wildly about what this reduction might mean, they simply say that their study finds a 'link' between motor empathy and cold-heartedness and end with the classic 'more studies need to be done'.

Unfortunately the information that can be gleaned from this study is pretty limited, and the brain of the sociopath is still a mystery.

A caveat: I assume someone has studied whether the physical reaction that I describe above occurs in sociopaths or not, but I did not find a study testing it.  If you know of one, please send it my way.