How and Why Neuroscience should be taught in School


The brain is misunderstood.  The media and public generally do not understand even the very basics of neuroscience.  Can your average person on the street tell you what a neuron is, draw one, explain how it is different from a blood cell? Perhaps more importantly, can the people who are prone to saying "slap to the cerebellum" and "men use different parts of their brains than women" actually tell you what the cerebellum does or what an fMRI actually measures?

I understand that you can lament anything as not being well enough understood by the public. The laws of physics, the rules of grammar, the history of ancient civilizations, and how to spell are all things that cause experts to sigh and shake their heads about the lack of knowledge in the general public. However, all these things are taught in school, while neuroscience is not.

Why Neuroscience should be Taught in School

Neuroscience is sort of where genetics was 20-30 years ago: The scientific frontier, fascinating to the public, changing the general worldview, raising ethical questions, science fiction's closest reflection in reality.  This has its benefits and its downfalls. There is currently strong general enthusiasm for neuroscience for just these reasons, but because everything 'neuro' is so exciting, the risk of media misrepresentation is high and the misuse of neuroscience concepts and terms by pseudo-science is common.

*Anything that makes noise stimulates your auditory nerve (Example from Cordelia Fine)
**If one eye is open, both sides of your brain are being stimulated

How Neuroscience should be Taught in School

One of the limitations to teaching neuroscience in schools is the cost. A set up for a neurophysiology experiment can cost thousands of dollars. Backyard Brains, a company which I have blogged about before,
has recently published an open access paper describing the use of their spikerbox in a high school environment.


The students assembled their own spikerboxes and conducted experiments to answer questions like:

How does your brain tell your muscles to move?
and
How do neurons generate electricity?

The students generated interesting questions themselves beyond the ones pre-determined for the experiments. In the discussion, Marzullo and Gage state "K-12 students are capable of not just following experimental protocols, but also participating in scientific discovery." 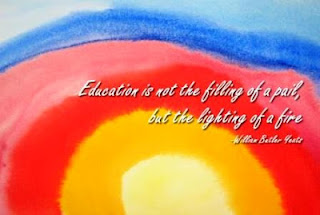 In conclusion, I hope that this investigative, experiment-based approach to teaching neuroscience in schools will take off and that the basic principles of neuroscience will become common knowledge.  Will this stop people from believing in unrealistic miracle treatments? Of course not, but it may inhibit people from casually and incorrectly throwing around neurojargon to sell a product.