Today I am going to talk about just one thing rather than poster highlights from the whole day.
As always, all the SfN Neuroblogging posts can be found here. Other posts on gender and neurosexism can be found here. 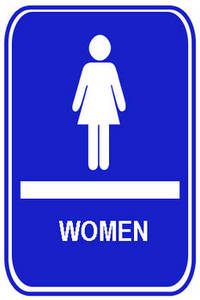 Today was the annual "Celebration of Women in Neuroscience Luncheon." This is one of the highlights of SfN for me each year. There is always a fantastic speaker (Phyllis Wise this year) and the lunch is delicious.

The study found that the male names received more and higher paying job offers and were judged to be more qualified. And it wasn't just that men thought women less capable. The females who judged the resumes were just as biased as the males who judged resumes. This is pretty depressing. I mean this isn't the middle ages, or even the Victorian era, aren't we past this bias?

But that's exactly the problem. We think we are past this bias. Even though people (both women and men) don't think they have a bias, they actually do. Even you. Just like you probably think you are smarter than average, or a better driver than average, you also probably think that you are less biased than average. That. is. the. problem. People have an implicit bias towards thinking men are smarter, better and more capable even when faced with the exact same description of the person. And they don't acknowledge this bias.

How can you combat or fix a bias that people don't even think they have? A gender blind resume process could be implemented in the initial application process for a jobs. But as soon as the applicant arrives for an interview, the gender bias would rear its ugly head. Should faculty or hiring committees develop an explicit bias towards women in their hiring and salary negotiation process?

I do not know the answer to this question. I can't think of a better way to combat implicit bias than with explicit bias, but it's hard to argue that implementing an explicit bias is 'fair' (It is a bias after all). It would especially seem unfair to those who don't think that they are implicitly biased (which we have established is basically everyone). But is there a fair way to handle this problem?

UPDATE (10/19/12): Thank you to Dario Maestripieri for helping me think about this problem in a new way. Perhaps the best way to start addressing an implicit bias is to make it explicit. When someone makes an idiotic or sexist comment, it should be made public. When someone gets grabby, it should be made public. The whole point of this post is that one of the biggest problems with gender bias in science is that people don't believe it is there. If it is made clear that it is there, people can more easily fight against it.