Calcium: for more than just your bones

You have probably heard that calcium is good for your bones, but what you might not know is that your brain can't function without it.


We have previously discussed the electrical properties of neurons.  Much like the sodium ion (Na+) and the potassium ion (K+), the calcium ion (Ca2+) can flow into and out of the cell to modulate its electrical activity.


Calcium has an even bigger role, however.  When a burst of activity in a particular neuron causes calcium channels to open, the calcium ions rush in and bind to all sorts of molecules inside the cell.  These molecules help adjust the connection between two neurons by helping to strengthen or weaken the synapse between them.


Because calcium easily binds to many molecules, and because it flows into the cell when the cell is activated, dyes which bind to calcium have made it possible for scientist (and you) to 'watch' neurons fire:

Amazing, right?  When the neurons are activated, the calcium rushes in and binds to the dye and causes the cell to light up.

If you noticed, it's not just the main middle part of the cell (the soma) that lights up, the dendrites light up too. If you watch very closely you can even determine the direction of the signal. Sometimes it is going down the dendrite to the soma, and sometimes it is going up from the soma out through the dendrite. Being able to see the location of the calcium signal is more specific that just seeing (or hearing) spikes from neural activity (which is a summary of what the cell is doing as a whole, but doesn't differentiate between parts of a neuron).


A recent review by Grienberger and Konnerth highlights some of the even more amazing advances to calcium imaging.  They explain how, using a light-weight teeny-tiny head-fixed microscope, scientists can now image the activity of neurons inside the brain of a living, moving mouse. 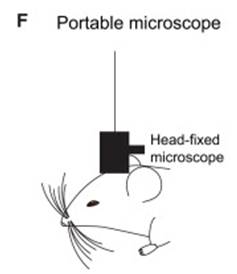 This is a huge advance because now scientists can see not only that a specific cell is firing when something happens, but can actually watch the activity of different dendrites on a single neuron when that thing happens.

One of the limitations to using calcium imaging to watch neurons in the intact brain is that light doesn't travel through the brain that well.  So far only the neurons close to the surface of the brain are being imaged.

Email ThisBlogThis!Share to TwitterShare to FacebookShare to Pinterest
Labels: microscopy, neuroscience for everyone, new techniques