Typing, Basketball, and your Striatum

A few readers were kind enough to take the online typing tests that I linked to and report their results. Unfortunately there are too few Dvorak users out there, so no new results from them. However, the Qwerty users had some seriously fast fingers, so I had to change the scale of the graph!

This piqued my curiosity and I wanted to know how fast the FASTEST typists could type,  I also wanted to see them in action.  so for your viewing pleasure, here is Sean Wrona winning the 2010 SXSW typing championship with 163 wpm.  (I gather from the internet that he can actually type as fast as 237 wpm)

He types in Qwerty, and since he could apparently type 80 wpm at age 6, I imagine the keyboard format is pretty ingrained in his brain.

Which brings me to another point:  I would like to look at this guy's brain.

But what exactly would I be looking for?

Consistently 'exercising' a part of the brain can result in visible structural changes there. A classic example of this is the taxi drivers who show navigation based changes in hippocampal structure. (Maguire et al., 2000)

The hippocampus is cool and all, but I wouldn't expect to see typing-dependent changes there. It traditionally has much more to do with episodic memories (yes, Proust), and spatial navigation (yes, Place Cells).


The brain structure that I might expect to be affected by extreme typing expertise is called the striatum (a part of the basal ganglia). While it receives less attention than the hippocampus and amygdala, the striatum is a fascinating structure crucial to forming habits, addiction, and learning motor skills. Playing the piano, kicking the soccer ball, typing, and almost anything that people refer to as 'muscle memory' is a motor sequence learned with the help of the striatum.

A recent study from Korea has compared the size of striatum in basketball players (6 hours of practice a day) to the size of the striatum in non-athletes matched for height and weight.  Park et al., (2010) found that both the absolute and relative sizes of the striatums (in both hemispheres) were larger for the basketball group than for the non-athlete group. They give a few reasons why this might be so (more cells, more blood flow to that region etc), but nothing conclusive.

While this is an interesting study, it is very limited. The question remains: What aspect of basketball (if any) is causing this structural difference?  And there are many possibilities:

I would like to see a more thorough experiment, using something as simple as this foursquare design: 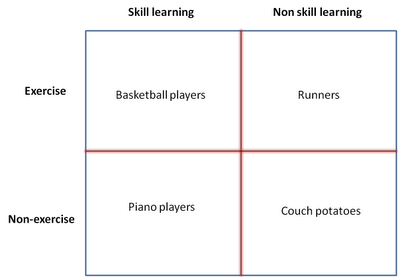 So getting back to the expert typist scenario, which box does the typist fit in?  It is clearly not exercise, but it is not exactly equivalent to piano playing either.  The piano player learns new songs on a regular basis, while the typist doesn't learn new paragraphs or new sentences in the same way.  If it is the skill learning that 'grows' the striatum, then typing practice might not do anything past a certain point. It might take learning a new keyboard style to stimulate 'skill-learning' based growth.

In conclusion, the striatum (and possibly the cerebellum) might be an interesting place to look for brain changes in typing experts. However, the particular skill of typing fast in not necessarily the most likely skill to cause changes in the striatum.

Email ThisBlogThis!Share to TwitterShare to FacebookShare to Pinterest
Labels: hippocampus, neuroscience for everyone, random, striatum