As I have recently explained, The Cellular Scale wants to weigh the worth of certain claims made by the media, individuals, and scientists.
To start with, we will investigate the claim that hot flashes can cure cancer. I just heard someone say this the other day, so there is no media or peer-reviewed source to condemn.  However hearing it from a non-scientist in a completely non-scientific context leads me to believe it might be something that is popularly accepted, and therefore merits a good close look. 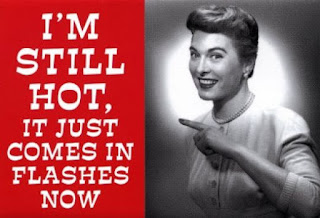 Here is the exact quote I heard:

There are some obvious problems with this specific claim. If this is true as stated, then no one would have cancer cells remaining in their body after undergoing a hot flash and heating up the body would be the undisputed cure for cancer.

So lets take a look at a related, but somewhat less drastic claim:


"A new study shows that having symptoms such as hot flashes during menopause appears to be tied to a lower risk of the most common kinds of breast cancer."

This claim is based on an actual paper. The paper suggests that this connection is due to differing estrogen level in women with and without symptoms